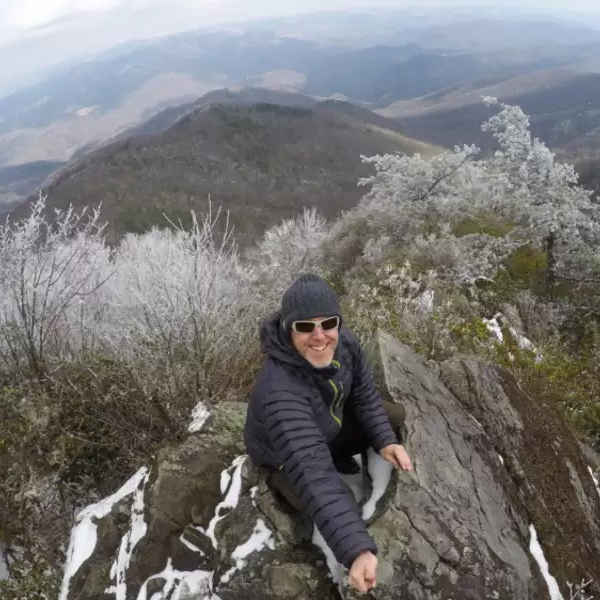 It’s National Walking Month, and while most of us are happy to go on a gentle stroll, one Horsham resident takes it to the extreme… despite having had a total hip replacement.

Matthew Isherwood has recently returned from walking the whole length of the Great Smoky mountain range, part of the Appalachian Trail in the USA -  an 80-mile route, climbing up and down repeatedly to around 6,600ft, carrying a 26kg pack with kit and supplies on his back. Not forgetting the ice picks and crampons to negotiate the treacherous conditions.

He and two old school friends from Horsham had already walked the southern half of the Trail last year, sleeping in hammocks each night of a five-day mountainous trek.

“If you enjoy walking, then the Appalachian Trail is one of those lifetime goals,” says the 41-year-old father of two, “and The Great Smoky Mountain Range is probably the most challenging section.”

But before he had his hip operation, it was something he could only have dreamed of.

When he was 17, Matthew was run over by a coach, an accident which crushed his legs and dislocated his left hip.  He was in hospital on traction for six weeks, crutches for six months and a walking stick for more than two years.

An active young man, he was determined to get his fitness levels back, so swam and cycled regularly. By his mid-20s, he was enjoying his love of walking again, playing sport and tackling treks across The Downs, in The Brecon Beacons and Snowdonia.

But the early trauma took its toll and he began to suffer with arthritis.  His job as a Chartered Surveyor for Horsham-based firm, Acorn Surveyors, where he is a founding partner, means he is on his feet most of the day, up and down ladders and crawling into loft spaces to do inspections.  While he says the pain didn’t stop him doing his job, he suffered afterwards.

As the pain became progressively worse, he was struggling with lack of sleep and admits he was becoming grouchy.

“It was not like me and I didn’t want to carry on like that, feeling irritable with the constant chronic pain. It wasn’t good for family life and I had also become less active and couldn’t do the long treks anymore.”

In 2011 he was told the hip joint had significantly deteriorated and that he needed a total hip replacement.

“I was only 35 so I put it off for as long as possible and started to take prescribed painkillers. It didn’t stop me doing things, but I really suffered afterwards, and the painkillers just didn’t touch the pain. They just made me feel groggy.  It took me 18 months to get my head around having a hip operation, but by then I realised I needed to do something positive.”

Effectively self-employed, Matthew decided to privately fund his operation, so he could choose a quieter time of year to have the procedure, which took place in January 2013 at The Montefiore Hospital in Hove, under the care of orthopaedic consultant surgeon, Mr Philip Stott.  Matthew was fitted with a titanium prosthesis with an over-sized ball joint to give him the mobility he needed for his active lifestyle.

He spent three nights in hospital and was up on his feet within hours of the operation. Back home, he embraced the physiotherapy, ensuring he built routines into his daily schedule.  He was using an exercise spin bike within a few days of coming home.

Building on his rehabilitation and return to fitness, Matthew joined Evolution Fitness in Horsham, who greatly helped increase his mobility and build back wasted muscle through high intensity functional fitness training.  Eighteen months post op, Matthew completed the Three Peaks Challenge in aid of Help The Heros, climbing the highest mountains of England, Scotland and Wales in under 24 hours.

“The sharp pains and chronic ache associated with arthritis went away following my operation – now I just ache like anyone else does after doing a tough challenge,” he says. “I found making the actual decision to commit to having the operation probably harder than the actual process itself. You know when you are ready for a hip operation, but it does take a while for the mind to process it. It’s the fear of the unknown, but I am so happy I had it done.  Persevering and putting the effort in with the physiotherapy and exercise are vital in the rehabilitation process but you get out what you put in.   Completing the entire Smoky Mountain Range was a real achievement for me, in tough sub-zero conditions, and one that I would not have even contemplated attempting prior to my operation.”

But the biggest benefit of the operation, he says, is being able to fully enjoy an active family life with his supportive wife and their two sons, aged ten and seven.  An outdoorsy family, they are looking forward to a short break at Centre Parcs soon where Matthew will be on the climbing ropes alongside his sons.

“It is the little things that make a big difference and that you are most grateful for,” he adds.

First published in West Sussex County Times on 31st May 2018.