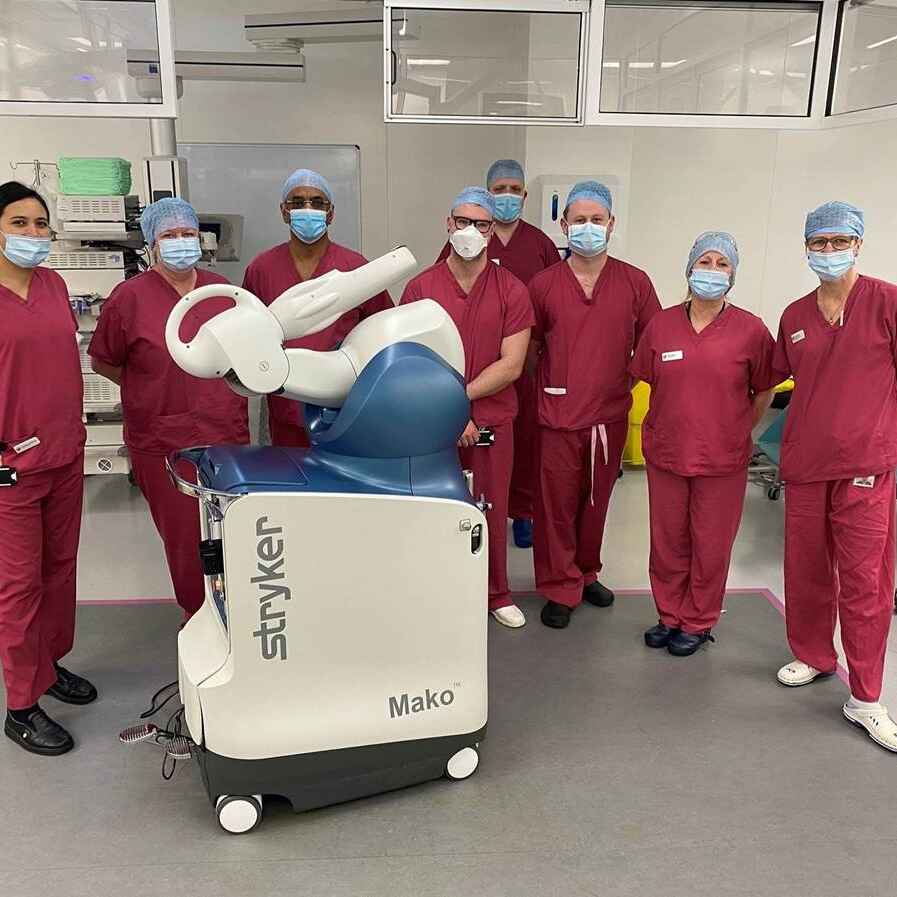 Brighton-resident Hugh Thompson says he was surprised to be diagnosed with osteoarthritis in his left knee, but after several years of pain, struggling to walk and a reliance on OTC medication, he knew something needed to be done. What he didn’t know was that he would become the first patient at The Montefiore Hospital in Hove whose surgery was assisted by a robot arm. His surgeon was knee consultant Mr Sandeep Chauhan.

“I was really excited on the day of my surgery as I have been an avid follower of robots and how they are used in hospitals. “ he says.

The operation lasted around an hour and within four hours of waking up from surgery Hugh was walking the corridors and stairs of the hospital under the guidance of one of its physiotherapists. After only two weeks, he was even doing the food shopping, carefully balancing a supermarket basket in one hand and a crutch in the other.

“My recovery has been much faster than I expected. I was off crutches at home most of the time after two weeks. When they took the dressings off, I saw a clean wound and no bruising – it was extraordinary!”

“I expected to be much less mobile than I am - it has been very impressive. Even my physio was surprised by the level of movement I had in my knee and how flexible I was just over a week after surgery.”

Hugh is now looking forward to walking with friends and going travelling again, once COVID restrictions are lifted.

“To be honest, the last 18 months before my operation have been very hard. I like to walk locally down to the sea and take my camera, but I would get there and back limping badly.”

“Friends would ring and ask if I fancy doing a walk round the South Downs, but I would say it is not going to happen at the moment. I used to enjoy rowing to keep fit but had to give that up too because of knee pain. Any trip out was planned around whether I could do the walk or not.”

Hugh’s operation took place on Monday, January 11, 2021, just a week after another national lockdown to control the COVID virus was put in place.

“Having my knee replaced made the best use of lockdown as I couldn’t go anywhere anyway, “adds Hugh. “I am now looking forward to getting back to walking and travelling without having to drag my left knee around - although I think my knee may be fixed faster than COVID.”

The story had some press coverage on The Argus which you can read about by pressing here. Brighton and Hove News also ran article which can be read here.