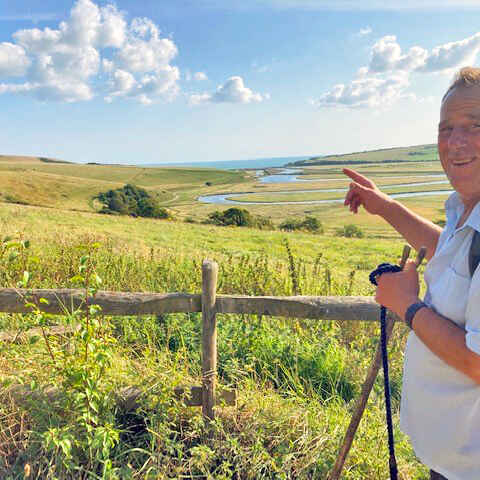 Seventy-year-old Nick Henry of Albourne, West Sussex, has recently completed the 160km South Downs Way with his wife Angie – an achievement he could only dream of a year ago.

Thanks to two new knees, he now enjoys going for walks with his dog, Crumble, and ticking things off his bucket list. The South Downs Way was one and a river walk, preferably in France, will be another, he hopes.

After half a lifetime suffering with knee problems, Nick had a full replacement to his right knee in September 2020 at The Montefiore Hospital, as an NHS patient, under the care of Mr Robin Turner, consultant orthopaedic surgeon. His left knee was replaced in February this year. (During the pandemic, the private hospital in Hove became the regional surgical hub for Brighton & Sussex University Hospitals now called University Hospitals Sussex).

“I just feel so lucky to have been able to have had the operation. It has been life-changing,” says Nick. “I was very well looked after at The Montefiore and in excellent hands with Mr Turner.”

A farmer most of his life, Nick puts his knee problems down to jumping off tractors on to concrete. During the past 30 years, he has had two arthroscopies (a camera is placed into the knee joint and the torn tissue is repaired or removed) and several rounds of physiotherapy, but the pain continued.

Nick says: “When you are working with cattle, it is a full-time job. There is never the right time to have a knee replacement, so I kept putting it off.”

“I used to play tennis, but I got slower and slower and had to stop. I used to walk with my dog every morning and evening to unlock and lock our local church but had to cycle there instead as it became too painful to walk. Walking was no longer a pleasure.”

“It was particularly painful going up and downstairs. If I got downstairs and realised I had forgotten to brush my hair, I thought `it can wait’ as I didn’t want to go back up the stairs again.”

A couple of years ago, he had a cortisone injection which worked for a short time, but the pain came back again.

“Every step I took I could hear this clicking sound coming from my knees, and it was becoming more and more painful. I was told my knees were wasting away and my GP referred me to Mr Turner.”

Ten days before he had his first knee replacement, Nick’s younger brother, Angus, had the same operation in another county. “We now compare scars, and I am happy to say mine is so much better than his.”

At his first physiotherapy session after his operation, Nick was asked what his aims and ambitions were.

After his operations,  Nick began walking further and further. He started to walk to the local church again and went walking in the Lake District in the summer. It was during that holiday that he was inspired to email Mr Turner.

“I just wanted to thank him and let him know what a difference it has made to me.”

Nick and Angie completed the South Downs Way in September, spreading the 160km distance between Winchester in Hampshire and Eastbourne in East Sussex over 11 days.

“My knees were really fine. There was no clicking and no pain. Angie normally goes off at a fast pace but this time I was able to keep up with her. Now when I am out walking and I spot someone with bad knees - you can tell by the way they walk - I go up to them and say don’t do what I did and put off having the operation.”