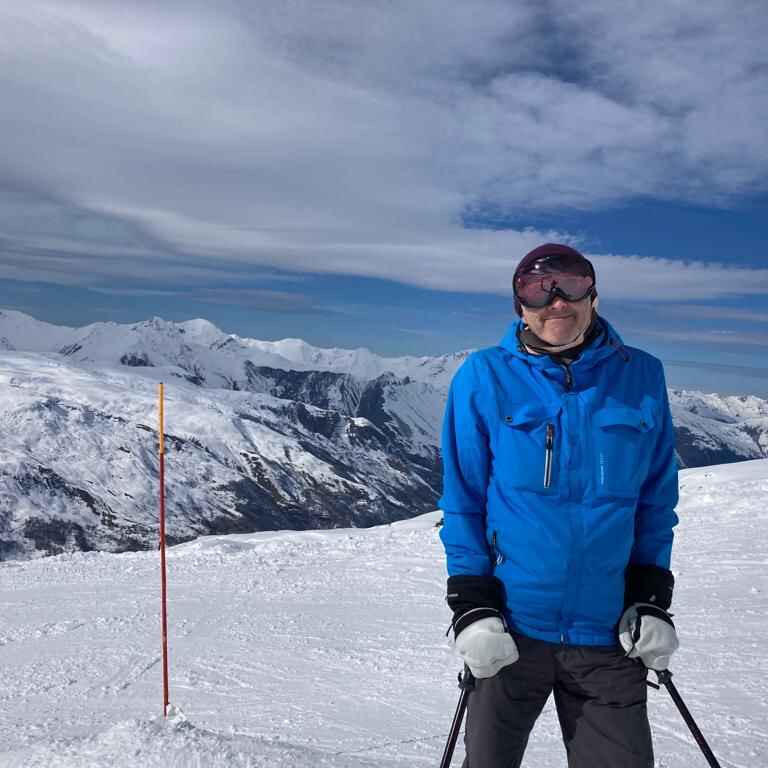 Brighton resident Anthony Rogers, 60, says he was `immediately a better skier’ when he took to the slopes not long after his knee replacement.

“I had control for the first time in years - I was amazed,” he says. “I go skiing several times a year but, until my operation, the problem had been the impact and weakness in my knee which meant I didn’t have the same control over the ski as I did with my other leg.”

He was equally surprised that he could go skiing in the first place having only had a full knee replacement just two months early in December, under the care of Mr Sandeep Chauhan, consultant orthopaedic surgeon at The Montefiore Hospital in Hove.

“When I was given the date for the operation, I explained to Mr Chauhan that ideally I wanted to go skiing in the February  - he didn’t give me an absolute no, so I felt there was a glimmer of hope.”

Anthony’s knee problems began when he felt a twinge playing football when he was 39. Three years later he had an arthroscopy (minimally invasive surgery to treated joint damage) and another one nine years after that but “I knew this was the start of arthritis” he says.

By the time he had reached his 50s, the athletic geography teacher had to give up running and playing football.

“If I played football or ran, I couldn’t walk for days after so I decided being able to walk was more important. I wasn’t in pain, but my knee just didn’t work or bend as well. There was a strong difference between the two knees and even my GP noticed my thigh was thinner on the left compared to the right.”

Anthony also found it difficult going from a seated position to standing behind his desk as a teacher at Brighton’s BHASVIC sixth form college and was provided with a standing desk to enable him to continue his geography lessons.

Cycling, however, was the one sport he was able to do right up until his operation. Anthony has coached a children’s cycling club for 20 years, trained cycle coaches and took part in competition and training sessions regularly. He had to give up the training and competitive cycling because of his knee but still rode his bike to and from work - no mean feat as he lives at the top of one of Brighton’s many hills.

After his knee replacement on December 12, 2021, Anthony spent two nights at The Montefiore Hospital.

“I had really good care at The Montefiore and that definitely contributed to my positive recovery, as did the care my wife gave me – I literally had two weeks of being really well looked after.”

Anthony was vigilant about doing the physio exercises he was given but “it took me a little while to realise that rest was equally important,” he says.

He used a static bike in the early weeks, setting the saddle higher than normal to take the pressure off the knee, and built up to 10 miles on that before heading out on the road.

He found an electric bike especially useful in his recovery and even cycled with it to his post-operative appointment with Mr Chauhan.

“He said most people come in still on crutches and you have just cycled here so I am going to sign you off.”

Anthony still does his knee exercises every day and is determined to even up the muscles in his thighs and increase his cycling fitness so he can start training.

“For skiing, the new knee allowed for improved technique, so I immediately skied better, but with cycling I had lost my fitness, so it has been harder to get back to my normal activities.”

“But I hope that one day, in the not too distant future, I will be able to ride off into the sunset with some luggage for a few days’ cycle tour. Having the knee replacement has certainly transformed me.”

What the surgeon says:

“I am delighted that Anthony has recovered well and been able to take up the sports he loves once again following his knee replacement,” says Mr Sandeep Chauhan, consultant orthopaedic surgeon at The Montefiore Hospital, Hove. “Every patient is different however. Taking up activities such as skiing after a knee replacement will depend very much on the individual’s pre-surgery fitness levels and familiarity with a sport, and their recovery progress. It is always best to seek the advice of your surgeon before restarting any sport post operation.”

What the physiotherapist says:

“Many people are keen to return to sports such as cycling and skiing after a knee replacement and I advise them this is definitely possible but they will need to work hard on their rehabilitation,” says Gregor Ross, The Montefiore Hospital’s lead physiotherapist. “The purpose of having a knee replacement is to improve quality of life, so if people want to return to sport, then my role as a physiotherapist is to support them to achieve this.”

“Anthony has done incredibly well, largely due to his dedication to exercise and activity both before and after his surgery. He managed to go skiing two months after his replacement which is fantastic, but I would say exceptional. People are typically advised it can take up to 12 months to have a full recovery after knee replacement surgery, so it’s definitely a marathon and not a sprint. It is very important that people progress at their own rate and not all patients will be ready to return to such high level activity so soon. But with exercise, determination, time and of course some rest, patients can definitely return to sport after a knee replacement.”